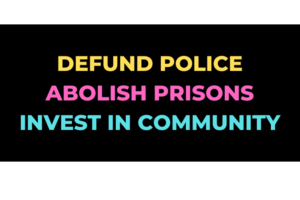 George Floyd should still be alive. So should Breonna Taylor, who was killed by Louisville police who violently entered her home in March. So should Tony McDade, a Black trans man who was shot and killed by Tallahassee police last week.

Black Americans are drowning in a sea of state-sanctioned violence and death. Every news story of another person killed by police hits like a wave, the grief and anger and fear threatening to pull us down with each swell. We are tired of trying to keep our heads above water.

The recent uprisings across the country in response to George Floyd’s killing by Minneapolis police officer Derek Chauvin should come as a surprise to no one. Floyd’s cries of “I can’t breathe” as the officer crushed his neck with his knee evoked the pain we felt after the killing of Eric Garner. His cries reminded us that, in a country thriving off of mass incarceration and police impunity, no Black person can breathe.

Black people have never been safe in this country, and the seemingly never-ending exhibition of Black death is triggering to us all. Critics of the uprisings have said that, instead of taking to the streets, we should work within the system to fight for the change we want. But how do Black people find freedom within a system that was designed to enslave, exploit, and ultimately kill us?

We can’t. The only way for Black people to be free in America is for us to create a new system altogether. The time is now to defund the police and abolish prisons.

The U.S. spends around $100 billion per year on policing and another $80 billion on incarceration. Just over the last few days, 17,000 National Guard service members have been deployed in 23 states, and yesterday, Donald Trump threatened to evoke the 1807 Insurrection Act to utilize military force to “dominate” protesters.

Defunding the police is a critical part of an abolitionist strategy that invites us to ask what we can be spending this money on instead of institutions that are built upon racism. How can we care for our communities, prevent harm from occurring in the first place, and thrive without fear? Abolition means tearing down these systems that do not serve us, and investing the time and resources necessary to explore alternatives to violence and punishment that truly make us safe.

The police were called on George Floyd because he allegedly used a counterfeit $20 bill — what if we created a Universal Basic Income so that no one would have to live in poverty? The police were called to Breonna Taylor’s home to search for drugs that allegedly belonged to a person who did not live there — what if we decriminalized drug use and sales in favor of community care? The police shot and killed Tony McDade without warning — what if we invested in the deep work of unlearning racism and transphobia within ourselves and deconstructing its existence in our institutions?

Organizers have fought for years within the system to keep our communities safe from police violence — state laws have been changed to increase police transparency, local civilian review boards to oversee police departments have been established, and campaigns have been won to elect more “progressive” prosecutors. But the killing of Black people at the hands of law enforcement has not stopped, and nor will it stop until we address its root causes.

This country’s focus on the so-called “violence” of recent protests is woefully misdirected and deeply rooted in racism. Let us refocus on the real violence of poverty, police, and prisons that keep Black people under the fear of death for all of our lives.

The time to explore what safety could look like without resorting to the violence of police and prisons is long overdue. No band-aid can heal the deep wounds of hundreds of years of institutionalized racism and inequality. It is true that we do not fully know what alternatives can look like, but the first step of abolition is tapping into our radical imagination.

This uprising is an opportunity to try something new. Now is the time to redirect resources to fund research, to pilot alternatives to the police and incarceration, and to invest in caring for our communities instead of tear-gassing, arresting, and killing us into submission.

Defunding the police and abolishing prisons may sound impossible, but that is only because we have not adequately explored those possibilities. The time is now to change that.

Taina Angeli Vargas is a prison abolitionist and organizer. She is the Co-Founder & Executive Director of Initiate Justice, an organization that works to end mass incarceration by activating the political power of the people directly impacted by it. She is also a woman with a formerly incarcerated loved one and a member of the Essie Justice Group sisterhood.

Abolition is for Everybody Transcript, Episode 0 – Pilot

Some IJ family news: in addition to running Initia

Our mission is to end mass incarceration by activating the power of the people it directly impacts.